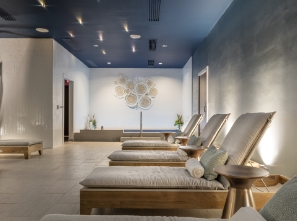 The Auburn/Opelika Marriott Hotel & Conference Center broke new ground Tuesday, announcing in a morning ceremony that it is building a new spafacility, expected to be complete by spring of 2018.

The hotel will become classified as a “Marriott Resort” in 2018, becoming one of only 54 Marriott Resorts worldwide and 17 in the United States.

The Grand Hotel in Point Clear, another RSA-owned property and part of the Resort Collection on the Robert Trent Jones Golf Trail, is the only Alabama property on the Marriott Resort list, according to a press release from the hotel.

“What a great day this is in our community,” said Opelika Mayor Gary Fuller. “I want to congratulate the entire staff here at the Marriott for what you’re doing and what you’re going to do.”

The 20,000-square-foot spa facility will have three floors that each has an array of services. Guests of the spa will go to the first floor for treatments, said Kevin Cross, general manager of the hotel.

On the second floor, guests can use the facility’s salon for styling, manicures and pedicures. There will also be a retail outlet and a bridal lounge, according to Cross.

Guests that want to work out can use the facility’s 2,000-square-foot fitness center. There will also be saunas and a 450-square-foot movement studio with instructor-led classes, according to Cross.

The design component for the facility is still in progress, but there will be natural elements involved.

“The elements that will be brought into this facility will be earth, water, air and fire,” Cross said.

The hotel is in the process of opening a spa membership program for the resort, according to Cross. He said the membership would include access to the hotel’s spa, tennis courts, pool facilities and golf courses.

“We’re excited to launch that probably sometime around the first of the year,” Cross said.

The Spa at Grand National was designed by Goodwyn, Mills & Cawood and will be constructed by Jesco Construction.

In 2017, the hotel started construction on 93 additional rooms on the north side of the property.

“We broke ground on 93 rooms on the north side of the building, scheduled for completion in spring of 2018,” Cross said. “The highlight of that is a 1,700 square foot presidential suite that will be overlooking the 14th hole on the Links course as well as Lake Saugahatchee. We’re very excited to have that come on board sometime in the spring and it brings a whole new dynamic for our hotel here.”

The hotel’s achievements in 2017 include being awarded the area’s first Four Diamond distinction by AAA and being ranked as one of the top five Marriott Hotels in North and South America (out of 365) for guest satisfaction.